The Skate wing is already practiced on the asphalt of Zaragoza 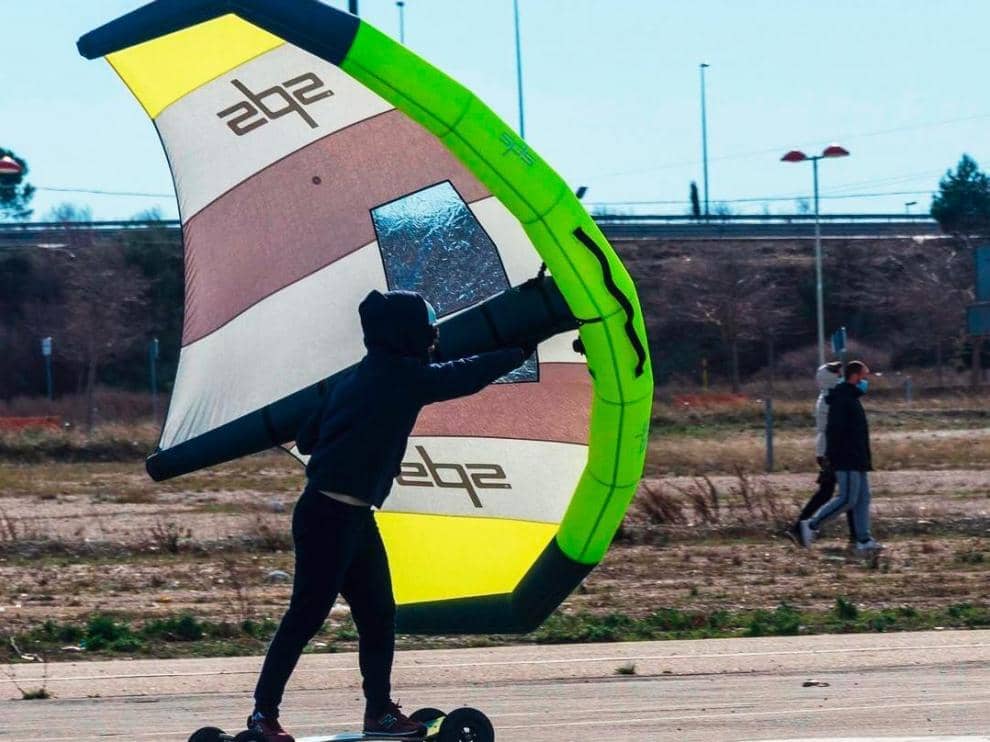 We share an article published in the Heraldo de Aragón about the Skate Wing.

An ordinary skateboard and an inflatable sail that can be bought for 350 euros second-hand is all that is needed to be able to practice skate wing. This sport, which is already beginning to be seen in Zaragoza, is a combination of these two modalities and consists of letting yourself be carried away by the force of the wind uploaded on a skateboard. To get around, you need to hold a candle in your hands and keep your balance.

Javier Usón, Rubén Vega, José and Luis Ortiz de Orruña are four friends who are fond of these disciplines who have been practicing skate wing in various areas of Zaragoza for a few months. When it’s windy but not too windy (between 18 and 25 kilometers per hour), they go to the Valdespartera fairgrounds and roll on the asphalt. On warmer days, they take the opportunity to go to the Plaza Park and be able to practice on grass, where more help from the wind is needed to move.

Actually, the skate wing is, to call it somehow, the little brother of the wingfoil. It is practiced in the water (be it a swamp or in the sea) and its incentive is to get off the ground and rise with a board and sail over the water. It is a mix between windsurfing and kitesurfing that can be seen at the 2024 Olympic Games in Paris and is increasingly being practiced in Spain.

As it cannot be done in Zaragoza, this group of fans began to test on the asphalt, also as the first step in a complicated learning process. “With the skate you learn to know the directions of the wind and how the sail works. Those who know how to roll, in half an hour of practice they already go and come back without problem ”, explains Luis Ortiz de Orduña.

In his case, he practices paddle surfing and his learning to wingfoil has continued to combine both disciplines. He calls it Sup wing and it consists of going out on the water with the paddle board and the sail. To go gliding it is not necessary too much wind, since it is not necessary to take off, and it can be practiced in swamps or in the sea.

But the third step, the one necessary to make the leap to wingfoil, is the truly complicated one. “After several days going out to sea with quite a bit of wind, I have managed to be in the air for 5 to 10 seconds. You are going at about 25 kilometers per hour and the feeling of not listening to anything and of freedom is brutal, ”he assures.

Achieving this small achievement has not been easy and that Luis is used to practicing this type of sports. “It works like an airplane when it wants to take off. The foil, which is a mast that goes under the water, begins to lift as the sail picks up speed with the wind. For that, it is necessary that it blows well and that all the equipment, both the board, the sail and the foil, are of the right size for the weight of each one ”, he explains.

Once the first challenge, rising above the water, has been achieved, it is necessary to maintain balance and height, compensating with the body slightly leaning back. “All of this takes days and days of practice. It costs because once you are up, 50 or 90 centimeters from the water, you go very fast and fear enters ”, he assures.

Therefore, his recommendation as an amateur and beginner in wingfoil is that those who are starting, like him, do not get frustrated and do not throw in the towel at the first change. “People fight it because it is worth achieving, but you have to enjoy learning and spend hours on it,” he adds.

Along this path, Luis advises putting yourself in the hands of professionals. In Aragon, you can receive wingfoil classes in the La Loteta reservoir, through various clubs and schools, such as Zsurf and Club Kitesurf La Loteta, specialized in all kinds of sailing water sports. “In addition, it is essential to have the appropriate material, the right one for your body composition and your level. I weigh 98 kilos and I have to carry a bigger sail, seven meters, to be able to get up with the wind. The foil, now that what I’m looking for is that elevation, also has to be big, even if this means that it opposes more resistance to the water and does not go as fast. First I want to learn how to get up on the water and, over time, I will try to pick up speed, with a smaller mast, ”he explains.

Although it is not suitable for all pockets (a cheap complete equipment costs at least 1,500 euros), wingfoil is a comfortable and easy sport to practice as far as equipment is concerned. “The board is much shorter than the windsurf board and you don’t need the lines, the mast and the kitesurf boom. A discipline, the latter, which also cannot be practiced on all beaches ”. Along with the board, the foil and the sail (which is deflated in a small backpack), the equipment is completed by a neoprene for cold months, as well as a helmet and an impact vest, to avoid damage in possible falls.

Both due to the logistics and the cost of the equipment, Luis and the rest of his friends are aware that starting to practice this sport right off the bat is not within everyone’s reach. It requires moving to at least some swamp, if not to the coast, and you have to have time.

That is why they have decided to set up the Wing Club Zgz, through which they want to publicize the existence of the skate wing, a step prior to wingfoil that is much more accessible to everyone. “At the moment we do not reach ten people but since we started we have already been noticing a greater interest,” explains Luis. And it is that when they see them, with a skateboard and a sail of considerable dimensions rolling around, it is difficult not to approach to ask. They do it especially young skateboarders, who can try without any obligation and for free how this skate wing is given to them.

“For now we have created an account on Instagram (@wingclubzgz) so that interested parties can contact us and the idea is, in September, to make ourselves known and for more people to join,” he explains. During autumn-winter, anyone can find them both in Valdespartera and in the Plaza park. “We don’t teach classes per se, but whoever wants to can come and try the practice. They contact us, we stay with them and we lend them the material, ”he adds. From their own experience they know that to be able to move on a skate wing it is not necessary to have previous skateboard knowledge. “The candle supports you. I don’t know how to ride without it, ”he says. This means that those who know how to skate are comfortable with this version in half an hour.

In his short but intense experience with the skate wing, Luis has observed how practically everyone who tries it ends up buying their own wing to improve and, who knows, perhaps end up sailing the waters with the wingfoil.